After sixty years in the saddle, the process of teaching a horse to let go of a thought and take up another one comes fairly naturally to me. Like most things that are so profound for the horse and seem to be difficult for the human to grasp, this is not much different. However, like anything worthy of good effort, the rewards for horse and human alike are pretty nice and will give your horse a great amount of peace. That being said, I believe that this is something within the grasp of anyone serious about their horsemanship. Observation and practice will be your greatest ally.

As I mentioned last time, the kindest thing we can offer the horse is to help him feel good inside. This can happen when we teach them to let go of a thought and take up another, thus alleviating the worry and trouble that they are feeling inside. So, in my perspective, this whole deal is fundamental to having a harmonious relationship with your horse.

What I am after here is for my horse to be mentally present, physically relaxed and aware of what is going on around me. I am not, as some folks want, asking my horse to be focused acutely on me. No, as long as he is aware of me, not going to sleep and is relaxed about anything I ask him to do, even willing to do it without me having to bring up a lot of energy, then that’s good. For me, and the horse, that is the sweet place.

In this, my horses know that I don’t deprive them of the freedom to look around– as long as they are still mentally present with me. I will often ask them to look again, changing from one side to the other, mentally, in the process of learning to let go of a thought.

In addition, let me say that it isn’t good enough to teach them to let go of a thought: they have to also take up another one. These go hand-in-hand.

So how to do it? I am sure there are infinite ways to go about this, but I will just open the door a tiny bit. First (and it might sound obvious), learn to recognize when your horse is having a thought other than being mentally present with you.

You can tell what is going on by observing their body language and where they are looking because their eyes are the primary window or indicator of where the horse’s mind is at. The ears are secondary. A lot of times people think that because the horse has an ear cocked on them, that he has his mind on them. Not necessarily.

Again, observe. Where are they looking? If a horse is thinking about other things, he will be like a little kid that can’t sit still. He will have his head up, looking off here and there. If he ignores you, the reason is usually because they are having a thought that is more appealing to them than being with you — like a kid who would rather go out and play instead of staying in the house to do chores.

Many horses that I work with, spend a lot of time with Peter Pan in Neverland. Instead of being with me mentally, they quickly go to the place mentally, as Tom Dorrance would say, where he is “sucking it’s thumb.”

This is a direct result of how this horse has been treated and “trained on” throughout his entire life. Because he was never given the freedom to make a choice, when he gets around people, although he might appear peaceful and compliant, he escapes as fast as he can to Neverland. Being compliant and obedient, it is as though this type of horse has no soul.

However, when he learns that he has the freedom to look and make a choice, hopefully he will develop an interest in what the rider and him are doing.

This process can work on a lead rope. 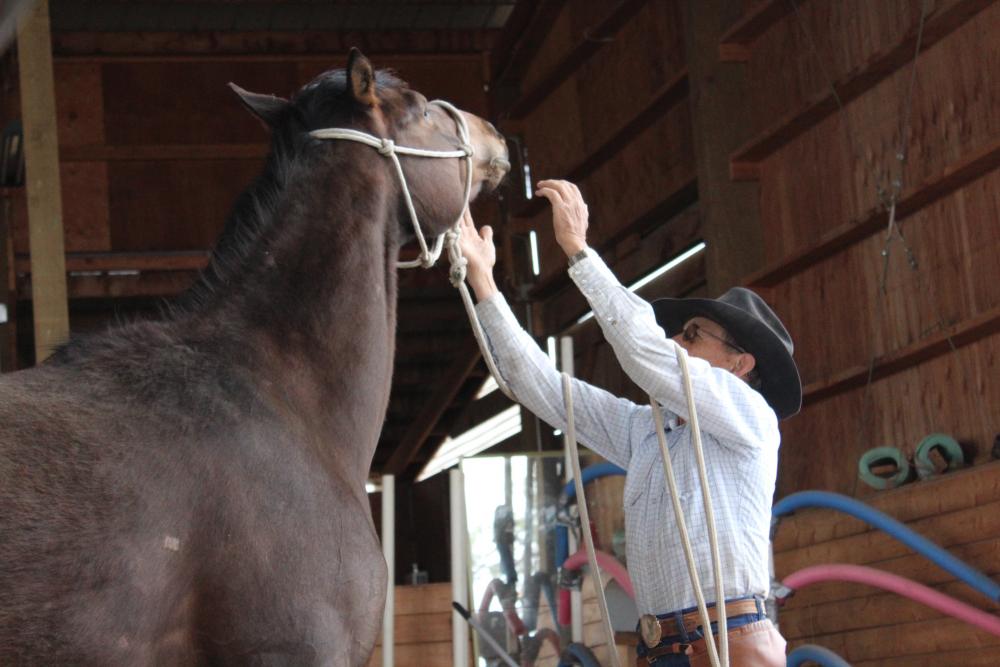 In a pen, when the horse is not mentally with me, I simply create a disturbance such as kick a little dirt or slap my rope on my leg, wiggle or slap my flag on the ground, any action that causes the horse to think, “What was that?” I am not doing any of this to the horse to scare or drive them. No. Just a noise or movement. Anything that would be a distraction. I might even have my back to them. Some little thing to get them to drop the thought they are having.

Now, you would not treat a very sensitive horse the same way you treat one who is not naturally sensitive or who has been made dull by people. If I am working with a very sensitive horse, I might just stand there in the round pen with my thumbs in my pocket. One little movement, such as scratching my ear, and a sensitive horse will think, “What was that?” On the other hand, you might have to throw a stick of dynamite under a dull horse.

Overall, I try to see how I subtle I can be for the horse to become aware.

Doing these little disturbances, pretty quick, the horse will go, “Every time I get lost out there, something happens. I don’t know what but something happens. But when I hang around with this guy, even though he smells funny, everything is all right.” 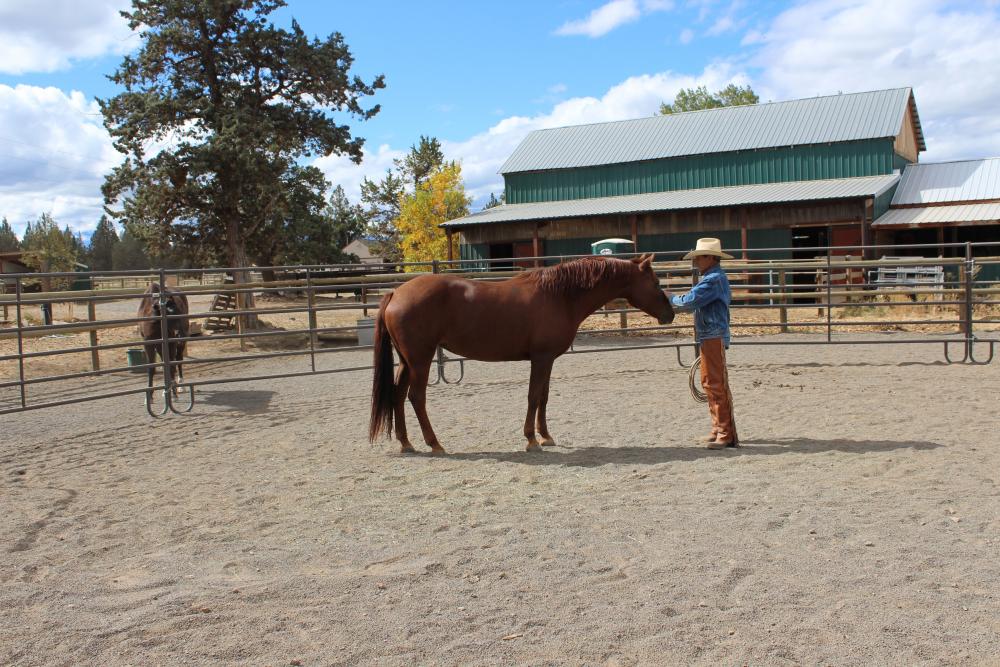 The beautiful thing here is that I am not making the horse be with me. Instead, I let him decide. In fact, I encourage him to have other thoughts until he freely decides that it is a good deal being with me.

I also use a process when I ride in small area having quite a bit of fun with my imagination to make the ride interesting for both me and my horse – so much so that if you could hear what is going on inside my head you might be tempted to call the guys with the straight jacket to get me hauled off. If you allow yourself to have the imagination of a six year old, you would have more harmony with your horse than thinking you have to have circles, leads and stops.

My horses don’t have problem riding in the arena where others get sour because, when I ride, I make up games, hunt out things and have fun. With me, it is a constantly fresh and ever- changing game with my horses. They get used to saying, “Oh the knothead has changed his mind again.”
Riding out in the big open, whether just a “trail ride” or an actual job, I keep track of my horse to keep him with me by asking him to let go of a thought or maybe just take another to check in with me.

I never indiscriminately pick up a lead or a bridle rein. It is always done with a purpose and the first thing that should take place for the horse when I ask, can he take a thought and take me somewhere. 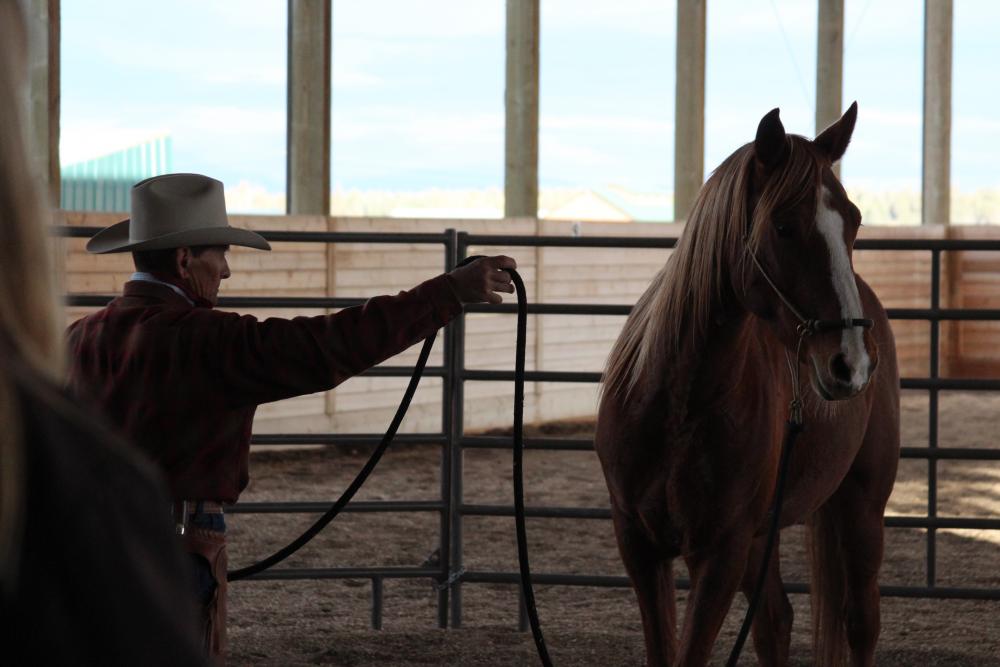 When your horse is relaxed, mentally with you with their mind is in neutral, they are like butter on a plate on a warm day. Everything becomes pretty easy. It is not so much of repetition, repetition, repetition, to get the horse to learn something as it is giving him the confidence to be with you and respond to your requests in any given situation as his education progresses.

I hope this sparks some interest and encourages folks to take a deeper look within their horses. Who knows, it just may ruin some people in a life of Que sera, sera to search more deeply with their horse.