“How important is ground work, really?”

I get asked that question more often than you might imagine. And for good reason.

Riders who want a good relationship with their horses are beginning to wonder. Most of what they and I see today when it comes to groundwork seems to consist of mindless circles, bends and changes of direction that are mainly for the human and have little or no benefit whatsoever for the well-being of the horse.

So, then, how important is groundwork?

Well, let me tell you the story of “Roany,” a name that might give you the impression that this three-year old gelding was a pretty easy-going sort of fellow. 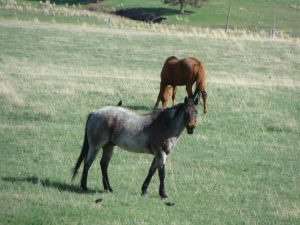 Despite his youth, when we got him at our ranch, Roany was already packing a world of trouble, so much so that you had to stay two steps ahead of him all the time or you might just end up in the hospital. For Roany, “normal” meant living in a constant nervous, fearful state of mind. So, any time he perceived a threat, even something as innocuous as a person walking by, Roany would blow up and buck.

It grieved me, knowing that Roany lived life without peace or relief. For years, I tried again and again to find the key that would help, but little I did helped him let go of the thought that would surface at the slightest perception of a threat in his eyes. Eventually, I learned from sources that knew of his history that much of his trouble came from his interactions with people, i.e. “trainers,” some of it so deeply imbedded that Roany, for the 18 years I had him on the ranch, would never be completely at peace.

I have to hand credit to Buck Brannaman for bringing breakthrough for Roany and me. Buck had come to our area for a clinic and I went to meet the man and discuss this roan horse. Buck encouraged me to bring him in and we would see what we could get done. Particularly on his right side, Roany had 2 very sensitive and touchy spots. Putting him in a totally unfamiliar environment caused him to be so preoccupied with all that was going on around him he could not think about the 2 touchy areas like he used to and he was more able to let go of that bother in his mind. When he found that he could let go and walk off without bucking it changed something deeper within his being. It was a step in the right direction.

Well, that clinic experience taught me something as well. I learned to look for the smallest or seemingly inconsequential thing that a horse might be dealing with in his mind and, observing it, do my best to help him let go of the troubling thought.

When we returned to the ranch, a now familiar environment to Roany, I embarked upon a different strategy. First, I would be very meticulous and centered while saddling him. Aware of any little touchy spot on his body and with thumb pressure or pats of the hand obtain a release of any tight area. If any of the steps were skipped or overlooked, it would not go well for Roany or me.

So, I was learning. And so was my troubled horse.

Over time, this intentional awareness on my part started to pay off. When we would do groundwork, instead of just going in circles, changing direction and all of that other mindless “stuff,” I would offer him something in which he had to engage his mind. Saying it another way, we worked together to help teach Roany to let go of his thoughts and to think with me.

Our work together came in an unexpected way. In 1998, a major forest fire burned a fair portion of the ranch. There was burnt or dead juniper trees and sage everywhere you went. One day after the fire, my son, Ben, and I were woking the side a steep mountain slope, gathering some pairs to move to another pasture. I was riding Roany and, somehow, without me realizing it, a burnt juniper shrub got stuck on the end of his tail.

Now, as Ray Hunt always told me, “a horse will tell you two steps ahead of time that he is going to buck.” Believe me. It’s true. Most riders just miss the change in their horse.

Well, all of a sudden, I felt a change in Roany’s step. I went to one rein, suddenly aware of the juniper in his tail and the dangerous situation we were in. The mountain was steep and, with his unsure footing, there would be little I could do to talk him out of taking care of what he thought he needed to do in order to save himself. A horse trying to save his own hide from a perceived threat will often do bodily harm to himself and anyone in his path.

As the whirlwind began, I stepped off with my mecate and did everything I knew to keep us both from taking a deadly tumble down the mountain. What began in chaos, with me getting very firm lasted only about 15 minutes because I started asking my very animated animal to move his feet with very specific steps.

By moving his feet in order to get to his mind, I asked Roany to do the little, focused job of placing his feet on the side of the mountain. Because Roany trusted me enough to agree to do what I asked, he began to let go of the fear he had of that juniper in his tale. Eventually he became peaceful. Juniper crisis over.

I stepped aboard and we started to get back to work. A minute later, Ben, riding behind us, warned,” Dad, Roany still has that juniper in his tail!”

“It will be okay,” I answered. “Eventually the thing will come loose.”

You see, I knew the irritation was still there but I wanted Roany to learn that, with me, he could be at peace despite the unseemly hairbrush. A time or two, feeling the juniper, Roany became a little nervous but all I had to do was pick up a rein, ask him to let go of that thought and life returned to being good between us.

In case you are wondering, we did not ride the whole afternoon with that silly thing stuck in Roany’s tail. It came loose about fifty yards after we started moving again. But the lesson was learned.

What is my point?

Simply this. On that rocky mountainside, if I had done what most trainers call, “groundwork,” driving him in circles and getting him to change direction, Roany would have pulled away from me, given our mutually unsure footing.

However, because I got very focused and intentional on engaging his mind through what I was asking him to do in that moment of his trouble, Roany was able to find peace. He learned that, with me, that despite having juniper stuck in his tail, everything was going to be okay.

That experience was a major turning point for old Roany. It became easier and easier to get him to let go of his fear when trouble showed its ugly head. He never got really good but much of life became so much better for this troubled animal.

Hopefully, most of you will never be riding a horse as deeply troubled as Roany. Still, if you want an amiable relationship with your horse, he still needs your help to be at peace.

What will it take on your part? A commitment of time and finances to gain knowledge that is based in truth and experience. Humility. A learner’s perspective. A willingness to let go of preconceived notions. Patience. And more time.

If you do these things, I promise that you will not only discover wisdom and understanding seeping into your life, you will find a deep level of satisfaction and fulfillment. Most of all, your horse will be the happy camper in your midst. 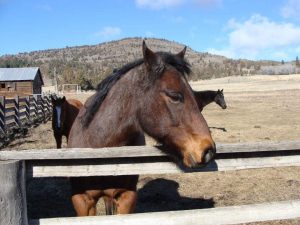